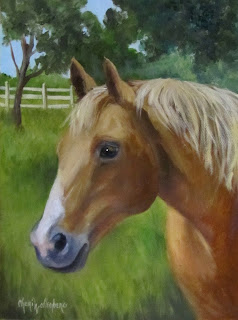 Walker the Palomino
9x12 Oil on Canvas
by
Cheri Wollenberg
Last summer I was teaching a painting class in my home and one of my students had made arrangements for us to visit a relative's horse farm.  They have some show horses, long horn cattle and ponies.  We took all kinds of photos for references to paint from and this one was of a very young Palomino horse.  He looked so quiet and docile until we approached him a little closer and his ears perked up and he jumped in the air and snorted.  He begin to kick around and run as if he was showing off for us.  What fun!  Horses are such beauties.  My husband used to rope in rodeos and we always had four or five horses around.  I miss them.  This one made a wonderful model.  To purchase this painting click Walker.
at January 29, 2011 3 comments: 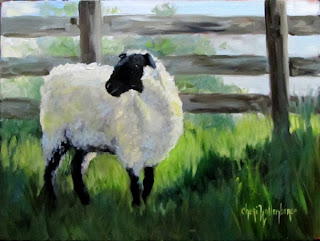 Eddie's Lamb
9x12 Oil on Canvas
by
Cheri Wollenberg
I painted this picture from a reference photo I took at my son's home.  I took lots of images because the lambs kept eating and eating.  Their heads were down constantly and finally this shot as this one looked up.  He was in front of a fence that the afternoon light was shining right through.  You can purchase this painting by clicking Eddie's Lamb.
at January 28, 2011 3 comments: 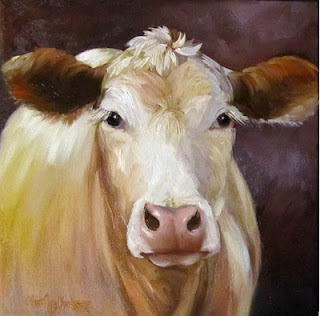 Constanze was one of the Weber girls in Mozart's life. It sounds as if he was attracted to all of them in some way, but Constanze through special circumstances became his choice. This is another interesting item of knowledge (or trivia) that I have enjoyed learning. A print of Constanze can be purchased here: Constanze 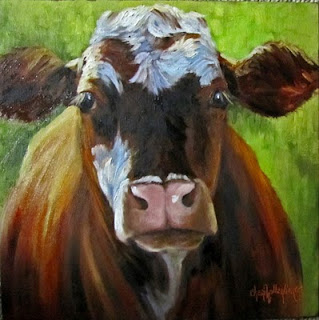 
I have learned a lot lately about Classical Musicians. When I went to art school we spent little time on visual artists' contemporaries...the "other artists". I was never assigned a paper on any artist other than visual...the ones I was studying. My art history books were full of the different art movements, but my focus, as was my discipline, was so much on the visual that I missed learning about some of the great musicians and writers...what a shame for me? Since I started this small series of naming my paintings after these famed musicians, I have done a little research on each one. I had read and seen movies about Beethoven, but had not personally read much of the other classical composers to any extent. There are so many fascinating, different opinions about these composers' personal lives. One unofficial quote of Mozart, "People make a mistake who think that my art has come easily to me. Nobody has devoted so much time and thought to composition as I. There is not a famous master whose music I have not studied over and over," rung a bell for me as an artist. I feel like I can listen now to classical music with "even more" enthusiasm. Mozart's life was absolutely too short. It sounds like he had so many people who influenced him...both good and bad. I think he had compassion for people as well as "passion" for music. I wish he had been born in our times. Something I am impressed with most as I study anything...the more we know, the more we know we don't know about everything! "Mozart! How I love your music!"  Prints are available at :  Mozart 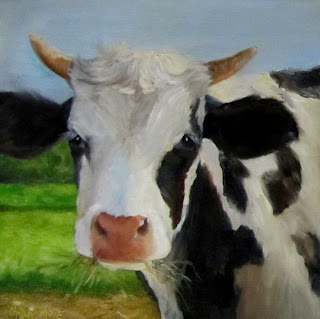 Handel
12x12 Oil on Canvas
by
Cheri Wollenberg
This "bovine muscian" painting was actually the first one I painted.  I named him Handel right off.  I don't have any  particular reason why this name came to me except that he does look gentle and thoughtful.  He is relaxed and eating his grass.  He didn't seem to mind that I was taking a lot of pictures of him.  In fact he seemed to pause occasionally like he wanted me to get a particular shot (laugh).
at January 14, 2011 7 comments: 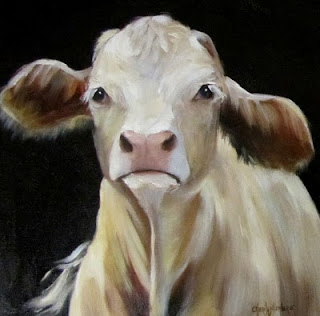 Beethoven
12x12 Oil on Canvas
by
Cheri Wollenberg
The story behind my Beethoven bovine (the second in my "Musician Bovine" series) is that as I was about to finish him I asked my husband what he thought of him.  He grinned....I knew that he was going to give me his honest opinion.  He said that usually when cows' ears are down it meant that they were sick or running a fever!  Oh well, as I have expressed before, I like to embellish and my comeback to him was that he was running up to my camera - which he was.  But I thought this is the best bovine to represent Beethoven.  Even with the handicap of deafness, he overcame and produced great music.  My Beethoven has ears that would remind folks that a handicap can be overcome with determination and a lot of encouragement from others.
at January 11, 2011 7 comments: 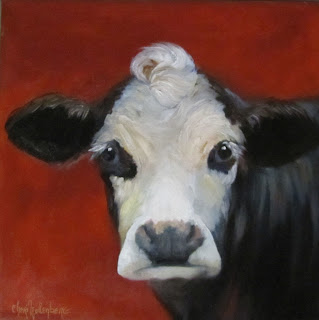 Bach
12x12 Oil on Canvas
by
Cheri Wollenberg
I am working on a new series of cow paintings.  This particular group will have musicians' names.  I have finished three and working now on the fourth.  I have lovingly called them "bovinia" in the past for those who give me a hard time....you know.....people like my husband.  He has raised cattle all his life.  He also has his own idea what a good bovine looks like, and I like to embellish them a wee bit (laugh).  Prints of these guys are available at Bach
at January 10, 2011 2 comments: 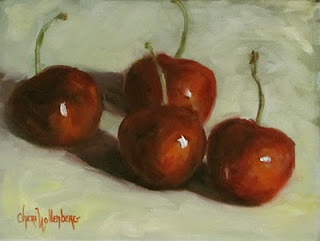 Cherries in a Group
6x8 Oil on Canvas
by
Cheri Wollenberg 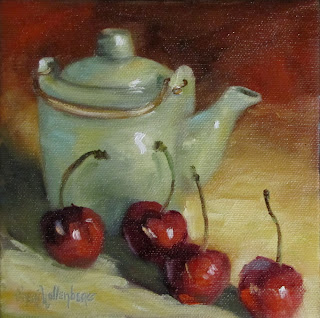 Cherries and Tea
6x6 Oil on Canvas
by
Cheri Wollenberg
The cherries are calling to me again!  I wanted to paint something with reds for the new year so I got all my images out and found some photos of cherries from a little "photo shoot" I had back when we had some fresh cherries at a nearby market.  I thought I might experiment in several ways so here are a few of my results.  I plan to post some more.  Both these paintings may be purchased on my etsy site at chatterboxart by simply clicking Cherries.
at January 03, 2011 7 comments:

Poppy Original 8x8 Oil Painting On Canvas by Cheri Wollenberg   Poppy is pig who might be hungry and waiting on his master to bring corn or ... 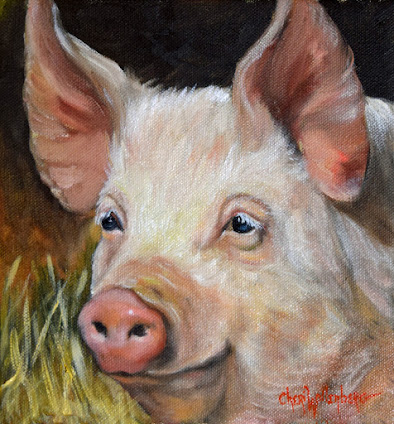 Cheri Wollenberg
I am an oil painting artist. I create paintings almost daily. My chosen medium is oil. I love the rich, vibrant colors being squeezed from the tube, the smell of the properties of oil and the "dance" they make with the brush in the process of being placed on a support. I have a desire to pursue excellence in both painting and living a life worthy of my Creator and Master Designer.